I have told this little story to my family and had forgotten that I had taken a photo. So it was great to find this slide in  my old collection.

After a day of diving at Mayor island my buddy and I headed off to the Aldermen Islands a few kilometres to the north west of Mayor. Actually quite remote. They have been described as sheer, majestic and brutally breathtaking. Our mission, seeing it was a lovely evening with unusually calm seas, was to anchor up for the night and do a night dive. We geared up, I had my camera and we had great dive lights all ready to go.

Prior to slipping into the dark we decided to bait up a shark line with a large Trevalley caught earlier in the day and leave it on the deck till after the dive.

The dive was awesome as most of my night diving experiences have been. Hard to describe frankly. We surfaced after about an hour and sat on the dive platform at the back of the boat doing the usual post dive rave. Reaching back on to the deck my buddy threw in the baited shark line and BANG something bloody big took the line instantly. It turned out to be this shark you can see in this picture. You might imagine the thoughts we had rolling around in our heads for the next few hours. We suspect we had been followed. I think it was a Mako shark. 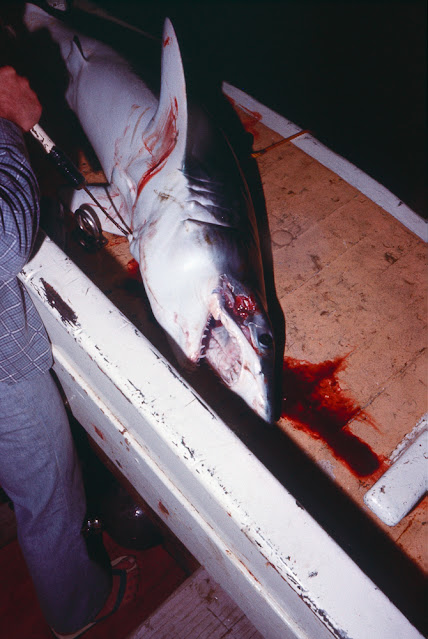